Jean’s speech for this afternoon’s debate at Stage 1 of the Land and Buildings Transaction Tax Bill. Check against delivery.

As a Member of the Finance Committee, I have had the opportunity to take part in the evidence sessions on the Land and Buildings Transaction Tax (LBTT) Bill. Two things have struck me in those sessions; one, how broken Stamp Duty Land Tax (SDLT) is as a method of taxation, and two, the fantastic opportunity open to Scotland to begin to recalibrate its system of taxation for the public good.

The description of SDLT as “a strong contender for the UK’s worst-designed tax” by the Institute for Fiscal Studies is very appropriate. The slab structure of taxation under the current Stamp Duty system discourages sales of residential properties at prices immediately above its thresholds, creating distortions within the market and adding to the angst already suffered by those attempting to buy or sell a home.

It is madness that a house worth £125,000 will result in no tax burden, but a home worth £1 more results in a £1250 bill. It would be a matter of public scandal if personal income was taxed in such ways; why, then, has it been deemed appropriate for house sales to be carried out this way?

The proposed move from Stamp Duty’s slab structure to a progressive structure under the auspices of the LBTT is therefore to be welcomed, particularly in the current housing climate. There are already enough challenges posed by the unsustainable housing bubble to men, women and families across Scotland in finding affordable housing; I am glad to see us removing some of these challenges by making common sense reforms where and when we can.

One of the other major problems with the current SDLT regime is the amount of money lost through tax avoidance schemes. The removal of sub-sale relief, which has been frequently identified as a facilitator of tax avoidance, from the LBTT will hopefully work in tandem with the Government’s other anti-avoidance measures to help increase the tax take and ensure that everyone pays their fair share.

One of the other measures that will greatly benefit my constituents is the proposal to exempt Rural Housing bodies from paying LBTT. As I have said before in this Chamber, any steps that we can take to promote the building of affordable housing should be considered, and hopefully this will encourage more to be built.

Although there are many elements of the Bill that are to be considered further at Stage 2, and indeed others such as the taxation bands, collection arrangements and block grant adjustments that will require further scrutiny in the months and years to come, I think I speak for the whole Committee when I say that we are encouraged by the considered, deliberative and open approach being taken by the Government on this Bill. Although I am aware that the Cabinet Secretary is not inclined to support relief for zero-carbon homes, I am aware of a proposal for a fiscally neutral energy efficiency modifier that has emerged since oral evidence was given by energy organisations in February. I would ask the Cabinet Secretary and the Government to consider their proposal as the Bill progresses.

I must confess that, in considering this Bill, I was mindful of the suggestions raised in Professor Mirrlees’ review, and echoed by Andy Wightman in his submission to the consultation, on what sort of taxation regime we should have for property. I certainly have sympathy with Mr Wightman’s suggestion for a radical overhaul of the way in which we think about land and property, but I am also aware that the Scotland Act 2012 only allowed for any replacement for SDLT to be a tax on transactions.

Therefore, although I would be inclined to support some sort of land value tax, I appreciate that we cannot allow the perfect to be the enemy of the good on this occasion and that the LBTT provides a solid move towards a more equitable system.

Finally, Presiding Officer, I note that this is the first of three pieces of legislation emanating from the Scotland Act 2012 that will begin to increase this Parliament’s powers. I look forward to the day that this Parliament has the full, normal powers of any other nation and is able to bring about the substantive changes in our economy and society we do desperately need.

I support the Bill.

After the Independent/Green group debate on the legacy of Margaret Thatcher, Jean called for a more equal society that values quality of life:

“Under Thatcherite governments of both Westminster parties, the UK has become the fourth most unequal country in the developed world. Politics has become fixated on international corporate profit above all else, when really all most of us want is a society that provides a safe, happy environment for ourselves, our children and our neighbours.

“The debate raised the importance of goals other than crude GDP. As Scotland looks to create a new vision of society in a post-Thatcherite and possibly post-UK age, we should consider tools like Oxfam’s Humankind Index, which encourage us to pursue real progress in areas like health, education and family life.”

I was able to attend the closing event in the Scottish Parliament for “Abolition 2000”.

Abolition 2000 is a network of over 2000 organisations in 90 countries who are working to achieve nuclear disarmament, and it was great to have a chance to meet and share experiences with international experts on nuclear non-proliferation and disarmament, including the Scottish Parliament’s own Bill Kidd MSP, an A2000 Global Council Member and Co-President of PNND. 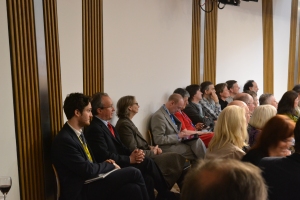 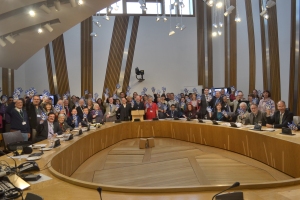 The Independent/Green group at Holyrood has agreed to move its debate on the subject “There Is Such A Thing As Society” from tomorrow afternoon to Thursday, after it became clear that the other parties and the Parliament’s Presiding Officer favoured the shift.

“It seems a double standard that Westminster was permitted to debate Margaret Thatcher’s legacy before her funeral, during the traditional period of mourning, while Holyrood cannot do so on the planned day even though the debate would have been after the funeral.

“However, the important issue is not the timing, but the Parliament having the opportunity to reflect on the damage that was done, and continues to be done, to Scotland by the ideology of Thatcherism.”

“Tomorrow afternoon’s slot had been allocated to us for some time and is a rare opportunity for us to lead a debate. Given the widespread public discussion about the legacy of Thatcherism we felt we couldn’t ignore the need to use our slot to assess the impact on Scottish society and the way forward.

“While we didn’t feel the timing was insensitive it became clear at this morning’s meeting that there was broad support for a swap of business and we were happy to agree to this. By having the debate on Thursday afternoon we can ensure the maximum number of MSPs can take part, and in particular ensure those on the Tory benches answer for the terrible effect on Scotland of thirteen years of policies that promoted selfishness over society.”