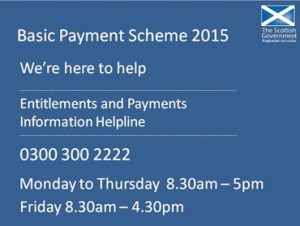 Jean Urquhart’s questioning of the Cabinet Secretary for Rural Affairs, Food & Environment, Richard Lochhead MSP, has revealed that the distribution of Single Farm Payments is well behind the schedule promised by the Scottish Government.

Mr Lochhead told Parliament in December that the majority of applicants would receive their first instalment by the end of January. But the Scottish Crofting Federation revealed that only 1% of their members had been paid by the middle of the month, prompting Jean to push for answers.

In the Topical Question section of Parliamentary business this afternoon, she asked the Cabinet Secretary “what percentage of single farm payment applications in the Highlands and Islands and in the rest of Scotland has been paid as of the end of January?”

Mr Lochhead admitted that only 28% of applicants in the Highlands and Islands, and less than 30% of applicants nationally, had received any of the funds due to them.

Quoting evidence from NFU Scotland that although almost 30% of applicants had received their first instalments, only 15% of the total fund has been paid out, Jean asked what proportion of the funds due to farmers in the Highlands and Islands had been paid. Mr Lochhead promised to calculate those figures and forward them to Ms Urquhart “as soon as possible”.

“Many crofters in the Highlands and Islands are having a very difficult time. This huge delay in payments combined with winter feeding, poor weather, and low prices for beasts, is plunging crofters and other farmers into financial emergency. Some have not even had their entitlement letters yet, and some of those that have been issued have been wrong.

“Farmers need peace of mind about their finances, and they need the money they are entitled to at this difficult time. It is essential that the Scottish Government get payments back on the schedule they promised.

“It is bad enough that less than 30% of applicants have received their first instalment, but the picture for crofters looks even worse. The Scottish Crofting Federation estimate that only 1% of their members have received payments. The Minister told us today that simpler cases were being dealt with first, which puts crofters – many of whom have had to lodge appeals due to misclassification of their land – at the back of the queue.

“Today the Minister said that officials will prioritise cases where there is hardship caused by late payments. I urge crofters and any other farmers who are in that position to call the Scottish Government helpline on 0300 300 2222 or visit their local office and ask for their application to be prioritised.”

She praised ministers’ efforts to put “wellies before slippers” by targeting support towards active farmers and away from wealthy owners of unfarmed land, and extend extra assistance to new entrants to farming and to island beef farmers.

The plans were announced to MSPs in a statement by Rural Affairs minister Richard Lochhead on Wednesday.

“The decision to cap payments at £400,000 puts an end to million-pound payouts to the very wealthiest landowners, making more available for smaller farms with bigger needs.

“The ‘Scottish Clause’, which cuts off direct payments for land with no farming activity on it, means we will no longer subsidise the ‘slipper farmers’ who claim grants for simply owning vacant land. And shooting estates which do not genuinely farm the land will no longer be able to claim funds intended for farmers. These welcome moves support working farmers and create jobs by incentivising bringing unused land back into production.

“I welcome particularly the extra help available to new entrants, the future of farming. They can now look forward to finally getting equal treatment from 2019, and in the meantime will get additional funds from the national reserve, and start-up grants of up to €70,000.

“The centralisation of slaughterhouses and associated transport costs mean that island beef farmers have been squeezed hard. I’m delighted that Mr Lochhead has not only won the fight with Whitehall to keep production-linked support across Scottish beef farming, but added a €65 per calf to-up for the islands.

“We heard only yesterday that Scotland is falling short in our ambitious efforts to tackle climate change, so I’m pleased to see mandatory fertiliser planning for grasslands, which can reduce carbon emissions, improve water quality and increase profitability.

“All in all, these policies are a remarkable achievement given the funding cuts imposed by both the EU and UK, and the balancing act of serving the fantastically diverse but often vulnerable Scottish farming community.”

EU rules allow governments to grant additional financial support to farmers whose land is in areas that are naturally harder to cultivate, currently called Less Favoured Areas. The same function will be carried out by a new system, called Areas of Natural Constraint, under EU plans for reform of the Common Agricultural Policy.

At Rural Affairs and Environment Questions, Jean asked the Minister for clarity on when farmers can expect the change to come, and how the new Areas of Natural Constraint will be chosen.

From the Scottish Parliament Official Report:

5. Jean Urquhart (Highlands and Islands) (Ind):
To ask the Scottish Government what the timescale will be for the introduction of Areas of Natural Constraint to replace Less Favoured Areas. (S4O-02821)

The Cabinet Secretary for Rural Affairs and the Environment (Richard Lochhead):
The European Union rural development regulation states that the new areas facing natural constraint designation is to be implemented by 2018, and we will review the current Less Favoured Areas scheme in line with the regulation. In the meantime I am committed to continuing vital funding at current levels for the current scheme, to ensure that farming and crofting businesses remain sustainable.

Jean Urquhart:
What guidance has the Scottish Government received from Europe regarding the criteria that are to be used to define Areas of Natural Constraint?

Richard Lochhead:
The debate on this matter has been going on for some time, and a set of criteria has been initially debated. However, because there has been a postponement of the decision to move to a new system, there will, no doubt, be further debate over the next couple of years about the exact criteria that will be used to define areas of natural constraint. During the original debate over the past couple of years, we took some comfort from the fact that Scotland met most of the criteria, although there may have been some debate at the edges about whether some parts of Scotland qualified. Clearly, however, we have an opportunity to debate the issues and iron them out over the next couple of years.