That the Parliament congratulates Shetland Islands Council and Community Energy Scotland on being finalists at the 2013 Scottish Green Awards as a result of their joint grant scheme, the Community Energy Efficiency Programme; understands that the programme is a two-year grant aid scheme designed to help volunteer-run community facilities to become more energy efficient and reduce their carbon footprint; further understands that 43 grants, worth almost £355,000, were awarded to 32 different community groups across Shetland, including public halls, youth centres, heritage centres, boating clubs and sport and leisure clubs, resulting in the upgrading of 26 facilities; believes that energy and carbon reductions could range from 12% to 48% less once all improvement works have been carried out, and considers that the Community Energy Efficiency Programme is a model example of how a joint partnership between a council and a charity can help communities to become more energy efficient and reduce their carbon footprint.

That the Parliament condemns Moray Council’s decision to close seven rural libraries; notes that the closure of the libraries, based in Burghead, Cullen, Dufftown, Findochty, Hopeman, Portknockie and Rothes, was subject to an equality impact assessment (EIA), which recommended retaining three of the libraries; understands that, despite opposition plans to keep all seven open or to keep the three libraries highlighted in the EIA open, the council administration pressed ahead in closing all seven; considers this decision to be a short-sighted penny-pinching one that will harm the cultural and societal fabric of some of Moray’s more remote communities by removing a hub used by some of society’s most vulnerable groups; notes that the EIA expressed concerns that “the council could be at risk of falling short of its statutory duty to secure adequate library provision and would thereby be exposed to legal challenge by way of judicial review”; believes that this decision, coupled with an earlier decision by Moray Council to cut its arts budget entirely, demonstrates a lack of understanding of the importance of the arts to society and may, if challenged, cost more money through legal challenge than is saved by the closures in the first place, and calls on Moray Council to reconsider the closures as a matter of urgency.

The Scottish Government’s Climate Challenge Fund (CCF) has made 563 awards to the value of over £46.9 million since its launch in 2008. The fund helps community groups who have projects designed to help reduce their carbon footprint, and funded projects in the past have included community growing projects, initiatives to reduce, reuse and recycle and energy efficiency advice.

To encourage potential applicants, the Scottish Government will be holding two further advice surgeries in the Highlands and Islands next week to provide information to local community groups and interested parties. These will be held between 9.30am and 12.30pm on Tuesday 23rd July at the Merkinch Community Centre in Inverness and between 9.30am and 2pm on Thursday 25th July at the Comhairle nan Eilean Siar Council Building in Stornoway (with videolinks to the Council Offices in Balivanich and Barra).

I would encourage any and all community groups with any ideas to pop along to these events in Inverness and Stornoway to hear more from the CCF. More information can be found at their website.

On April 26th, I was privileged to unveil a plaque at Plockton Railway Station to recognise a unique partnership initiative which has driven down anti-social behaviour.

Following complaints of low-level anti-social behaviour at the station by pupils from the neighbouring high school, it was felt the best way to encourage a feeling of responsibility and ownership was by bringing together a collaborative committee of those affected.

As a result incidents have been reduced considerably and the committee, which is made up entirely of pupils, has now gone one step further and adopted the ScotRail station. They now play a part in the station’s upkeep such as maintaining poster boards, planters and picking up litter. 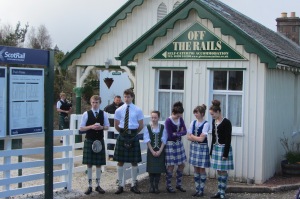 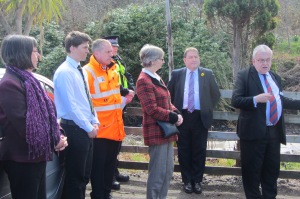 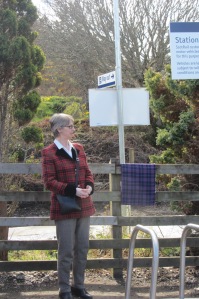 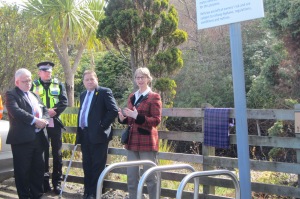 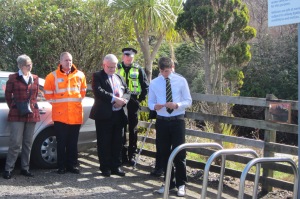 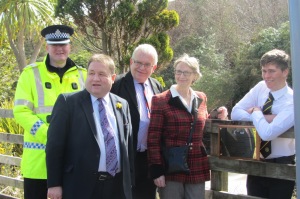 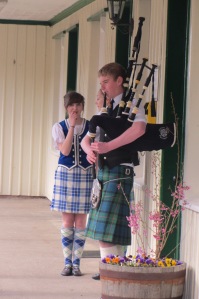 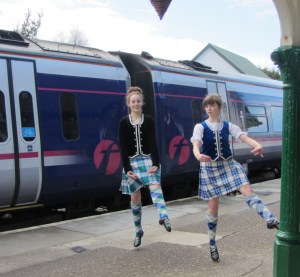 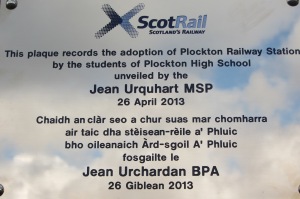 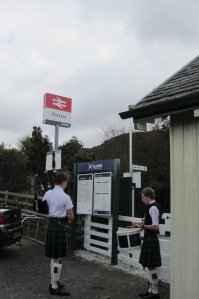 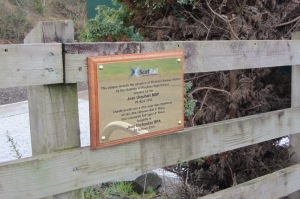 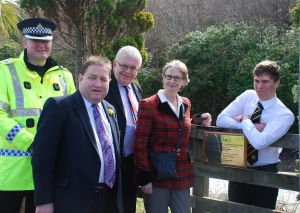 Shetland Islands Council’s Community Engagement
That the Parliament notes Shetland Islands Council’s invitation to members of the public to address it on relevant issues; understands that, in relation to education provision across Shetland, three parent council chairs from a deputation have presented a document detailing an alternative plan for education provision to the council’s Blueprint for Education; further understands that this document, produced by the parent councils, provides financial details for each of the alternatives; welcomes the active engagement of community groups in lobbying councils on decisions that affect their communities; considers this approach to be a laudable example of how communities can work together with local authorities to determine the best method of service delivery, and encourages local authorities, such as Shetland Islands Council, that it considers are attempting to drastically reduce spending, to consider similar methods of engagement with local communities.

September 2012 Big Lottery Fund Awards in the Highlands and Islands
That the Parliament congratulates the projects that have been awarded funding by the Big Lottery Fund in September 2012 in the Highlands and Islands; notes that 31 projects from across all eight constituencies in the region were awarded funds totalling £620,085; understands that, as well as smaller awards for discrete projects, this month’s awards included a £358,054 grant to Skye and Lochalsh Community Care Forum for a five-year Transforming Lives project; considers each award, regardless of its size, to be vital for third sector organisations to carry out community work; believes the continued support for organisations that encourage children to take up sport and the arts to be of particular value, and commends the Big Lottery Fund for the breadth of grants allocated.

I would like to congratulate my colleague Christine Grahame on bringing this debate to the floor- timely, I believe, as it was announced on Monday that the Great Polish Map has been awarded listed status. It is undoubtedly worthy of protection, and I am delighted that future generations will be able to admire the attention to detail of this unique structure. The use of gravity-driven water to recreate our rivers and lochs is truly magnificent,

I am sure that those speaking this evening will all concur with the historic importance of the map, not only as a feat of architecture and a reminder of the sacrifices made by Polish soldiers during World War II, but also as a symbol of the long-standing links between Poland and Scotland forged in that era that have remained strong ever since.

It is this connection that has continued to this very day that I wish to concentrate on. While all of Scotland has benefited from its special relationship with Poland- I think particularly of the Polish food shops that can be found in any city across Scotland, and the dedication of our supermarkets to providing Polish produce- the Highlands and Islands in particular has attracted a large number of Poles.

As late as 2004, the Highlands and Islands were threatened with yet further depopulation. However, this has dramatically changed, with Inverness still one of the Europe’s fastest growing cities, a growth that is concurrent with economic regeneration and attributable in part to its active, dynamic Polish community, forming roughly 10% of the population of the city. Across the Highlands and Islands, approximately 69% of all immigrants come from Poland, showing the strong ties that exist between our two nations. The mutual benefit of these ties is evident; they contribute hugely to civic life in Inverness and the surrounding region, and I was privileged to have the chance to recognise this by inviting along Zosia Fraser. Chair of the Polish Association, as my “local hero” for the opening of Parliament last summer. Among other activities, Zosia has organised translation services, accommodation and put in place other measures to help new arrivals to the early to settle and to truly become part of the local community.

Zosia is typical of the Polish community in Scotland in contributing so much to our society. I’m sure all of us in this chamber recognise the value to future generations of growing up in towns, cities and villages where many cultures are known and celebrated, where an awareness of our place in the world and that of others helps to inculcate a sense of internationalism and global citizenry- a sense, I am sure, will be all the more beneficial when Scotland regains its place among the community of nations.

In closing, Presiding Officer, I would like to once again welcome the continuing restoration of the Map, and support this motion.

Jean Urquhart MSP has welcomed the positive steps being taken in Shetland towards discussions of power being restored to Scotland and its communities.

The Highlands and Islands MSP spent last week in Shetland. Accompanied by MEP Ian Hudghton, Jean visited various local businesses and community groups, as well as conducting interviews with the local press and attending a meeting of the SNP’s Shetland branch.

“My particular interest in Shetland certainly started during the last election when I was the SNP candidate.

“It is very similar in so many ways, with the north-west coast of Scotland where I have lived most of my life.

“What is particularly heartening is the growth in the Shetland branch of the SNP.

“I accept that Scotland as an independent nation is not the thought on everyone’s mind, and it is the work of the branch members to raise awareness of the important issues that arise.

“I was particularly enthused by the vitality of the SNP’s branch in Shetland. In the run-up to the referendum on Scotland’s future, it is crucial that our positive message is reinforced across the country.

“Members of the branch will attend National Conference in Perth and I look forward to hearing them speak about Shetland issues from the platform.”

Jean Urquhart MSP visited Fair Isle during her latest constituency trip to Shetland, taking the opportunity to experience one of the region’s smallest and most unique communities.

The local MSP discussed topics such as marine conservation, community enterprise and travel provision for the island.

An added bonus was enjoying “Fair Isle Thursday”, when local folk and visitors come together at the famed Bird Observatory for a ceilidh.

“It was a privilege to have the opportunity to visit one of Scotland’s smallest and most vibrant communities.

“Those who live on Fair Isle really pull together as a community, with many residents performing various jobs on the island and so contributing to everyone’s wellbeing.

“Of course, Fair Isle’s geography is both a blessing and a challenge, with its environment attracting a unique blend of wildlife which in turn attracts tourists from across the globe.

“We must do all that we can to ensure that conservation efforts which are unanimously supported by those who live on Fair Isle, maintain the bird population for  a stable economy and future generations to enjoy.

“Access to and from the island is vital to sustain the population and attract visitors not only from Shetland mainland, but from the rest of the world too.”