Along with other SNP, Green and Independent MSPs, as well as a number of voluntary organisations, trade unions and disability groups, I signed an open letter to Chancellor of the Exchequer George Osborne MP calling on the Bedroom Tax to be scrapped in this year’s Budget Statement on March 20th. 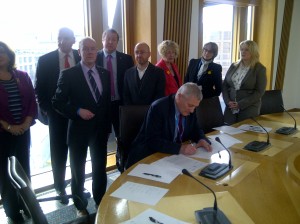 Just after 5pm next Tuesday, Members of the Scottish Parliament will debate Jean’s parliamentary motion that highlights the role played by crofting in Scottish agriculture, the challenges facing the sector and how crofting helps to maintain rural and remote communities. The debate will last for approximately 45 minutes and, in line with Parliamentary procedure, will be concluded with a speech from the Minister with responsibility for crofting, Paul Wheelhouse MSP.

Commenting on the news, Jean said:

“I am delighted that the motion, which I first lodged back in October, has been selected for debate next week.

“Given the coverage over the issue of sporting rights on Raasay last week, I think it’s very timely that MSPs from across Scotland, but particularly the Highlands and Islands, will have a chance to make the case for crofting in the Chamber.

“I would encourage all of my fellow Highlands and Islands MSPs to take part in the debate, and for anybody interested to watch the live stream of the debate on the Scottish Parliament’s website or to get in touch with my office afterwards to obtain a transcript of the debate.”

-The text of Jean’s motion is as follows:

That the Parliament understands that there are 18,027 crofts in the Highlands and Islands and across Scotland, housing over 33,000 people; considers that crofters play a key role through the production of store animals for the agricultural supply chain and in maintaining land in remote areas; believes that crofts are a valuable source of high-health status animals for larger agricultural food producers; considers the work of crofters to be vital to Scotland’s national food and drink policy and to the continuing success of the sector; understands that most crofters rely on common agricultural policy subsidies to earn a marginal income and that they have to take on second jobs; believes that, by bringing in new inhabitants and because of the economic links that crofters have with the rest of the agricultural sector, crofting has helped maintain population levels in remote communities, considers crofting to be of paramount importance to the environment, food and drink sector and economy, and would welcome the interests of crofters and their communities being championed.

-Members’ Business is a debate on a motion proposed by an MSP who is not a member of the Scottish Government. Generally the topic discussed relates to a particular region, marks a specific event or highlights an issue of interest to the MSP that might not otherwise receive attention. Members’ Business normally takes place after Decision Time on Tuesdays and Wednesdays and at 12.30 on Thursdays.* It lasts 45 minutes and concludes without any vote being taken.

-The debate can be watched either on the Scottish Parliament’s ‘Parliament TV’ section of its website ( http://www.scottish.parliament.uk/newsandmediacentre/3168.aspx ) or on BBC’s Democracy Live: http://www.bbc.co.uk/democracylive/scotland/

-The Official Report of the debate will be available from next Wednesday onwards.